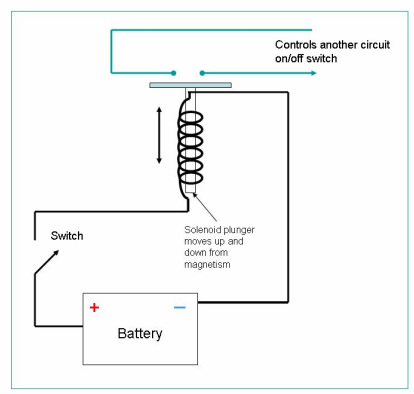 Relationship to Street Rods:  As mentioned above, a solenoid is used to engage a starter.   Referring to the drawing on the left, when the switch is opened, the center metal core or plunger is moved down by a spring (not shown).  However, when the switch is closed the electromagnetism moves the metal core upward and tries to center the plunger.  As it moves upward, the round disc on the top makes contact with another circuit, (acting like a switch) in this case energizing another circuit, the starter motor.  All relays or solenoids operate based on these principles.   Examples include the cooling fan relay, compressor relay, fuel injector solenoids, horn relay, starter solenoid, etc.