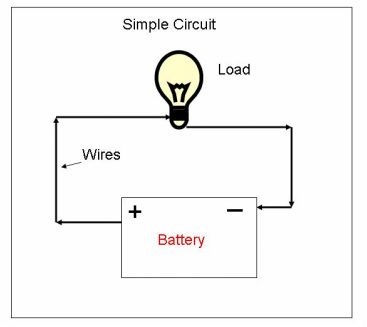 Description:  Circuits are used to show the operation of electrical components in an electrical system in a street rod.  A circuit normally consists of several components, First a power source is needed to provide the necessary voltage, (12 volt battery).  Second, wire is needed to provide a path for the flow of electrons or positive charges.  Third, a load, which can be any resistance, is needed.  Lights, radio, starter motor, sparkplugs, relays, wiper motors, are all examples of loads.  The load provides the resistance in the circuit.  An example of a simple light circuit is illustrated in the drawing to the left.  In this case, electricity flows from the positive terminal on the battery, through the wire, to the light, and back to the negative terminal of the battery. 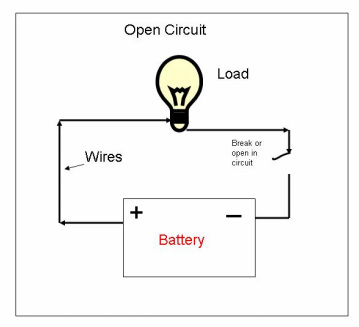 Electrical circuits may develop an open, shorted, or grounded condition.  Each of these conditions will render the circuit ineffective.  An open circuit is shown to the left.  In this circuit a wire has been broken or opened up.  In an open circuit, there is not a complete path for the current to flow through. An open circuit is the same as if the circuit had a switch in the open position placed in the wire. No current can flow so the light cannot go on. 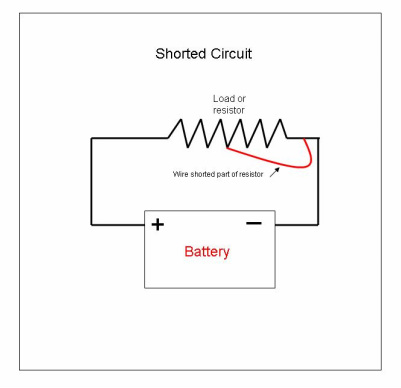 A shorted circuit is shown in the illustration to the left.  This circuit allows electricity to flow past part of the normal load.  In this circuit, the load is a heating resistor and the resistor is shorted so that some of the resistance is bypassed.  A shorted load such as this reduces the total resistance of the load.  This increases the amperage in the circuit, possibly causing a fuse to blow. 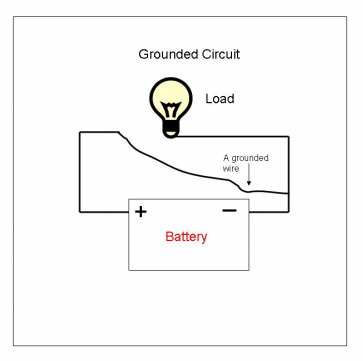 Knowing these simple circuits can help the street rod technician design and or troubleshoot an electrical circuit.  For example, if a light were needed under the dash, with an on/off switch, a simple circuit could be designed and installed.  A wire would need to be connected from an Accy (Accessory) point on the fuse panel to a switch on the dashboard.  The Accy point is the same as the positive battery terminal, but with a fuse between the battery terminal and the Accy. From the other side of the switch, a wire would need to be connected to one side of the light.  From the other side of the light, a wire would need to be connected back to the negative side of the battery, or to any point on the frame.  The circuit would look similar to the second illustration above, but the "open" would be replaced with a simple ON/OFF switch.

Back To Electrical Principles